As a result of child sponsorship as well as government and corporate grants, ChildFund Ireland is able to help change lives. Check out some of the Success Stories to see how ChildFund has impacted on children’s lives.

Cícero is 9 years old and lives with his grandparents and his two sisters, near the city of Milagres, in Ceará, Brazil. He has been sponsored since 2009 and the story of his relationship with his sponsor is very special. He currently participates in ChildFund Brazil’s programme, through a partner organisation ‘Sociedade de Assistência à Criança’ (SOAF).

In the community where Cícero lives, the income of the majority of the population comes from agriculture. The dry season represents their greatest difficulty, when jobs become scarce and most men in town have to leave and go to other states to seek employment.  Because of this, in 2010, Cícero’s father went to work in Minas Gerais, which put great strain on the family. After his parents’ separation in 2011, Cícero chose to live with his father in Minas Gerais and had to leave the SOAF organisation, being removed from the sponsorship programme in December of that year.

Whenever this happens, the sponsored child is replaced. But Cícero’s case was different.  His sponsor wanted to locate him to continue the sponsorship. During that time, Cícero’s parents found other partners and the children were left in the care of their maternal grandparents, back in their original community.  When the sponsor became aware of this, she sought to resume sponsorship and Cícero came back to ChildFund’s programme through local partner SOAF.

The relationship between them is based on care and respect. “We exchange letters. She is very special in my life,” he says.  Cícero adds that he considers her like a mother. “She worries about me, about my needs such as clothing, footwear, school supplies, and sends advice in the letters. She says I have to be a good grandson, respect my grandparents and study hard. She is a person who I love very much, even without knowing her personally,” explains Cícero.  They have not met yet but exchange two letters a month and maintain the affectionate bond of sponsorship. At a time when Cícero was a little aggressive, it was the affection and attention of the sponsor which helped to improve his friendship with other children at school.

Today, due to the sponsorship, Cícero is a happier child, self-assured, always has a joyful and kind expression and has good prospects for the future.  In her letters, the sponsor conveys security, saying that she will always be present whenever he needs her.  SOAF´s relationship educator, Helieuza Alves, says that sponsorship means security in Cícero’s life. “He knows he has someone who loves him and really cares about his future,” says Helieuza.

Fifteen years ago, Noemi was enrolled in ChildFund’s  ‘Colonias Unidas de Oaxaca’ programme located in Oaxaca, Mexico.  At that time, Noemi was 6 years old and she had the good fortune from that moment to be sponsored by Daniel Tearpock, a sponsor from Texas, USA, who is still supporting her.

After all these years of sponsorship, Noemi says, “I think that the relationship I have had with my sponsor Dan is very good.  He hasn’t stopped writing letters to me since I was 6 years old.  He has supported me and my family in many aspects.”

This has allowed Noemi and her sponsor Dan to develop a strong bond. Through the correspondence they talk about everything:  family, health, hobbies, school, job, their countries, their culture and the most important thing, their dreams.

Mr. Tearpock has always encouraged Noemi through the letters he sent her, to study hard, telling her how important it is to have good professional training in order to reach higher goals in life. He was aware that in July 2010, she would finish high school and that she wanted to obtain a degree in teaching foreign languages.

Noemi wanted to pursue a degree in foreign languages because during the time she has been exchanging letters with her sponsor, he told her about interesting things concerning his business trips. Noemi wanted to know more about other cultures, to speak other languages, to teach them to others, and especially to be able to communicate with her sponsor in his own language.

Unfortunately, during that year, Oaxaca was involved in a public teacher’s strike and Noemi was not able to join the public university. Her sponsor put all his efforts into arranging and investigating with ChildFund other college options for Noemi to study and follow her dream.

Thanks to the support of her sponsor, Noemi was able to join a private university and pursue the degree she wanted.  “Please don’t worry.  I was saving some money for you to study.  But it will not be easy; remember that important things require an extra effort,” wrote Mr. Tearpock in a letter to Noemi that she proudly shows and remembers.

Noemi is now 21 years old and enrolled in the fifth semester of her university degree.  Noemi knows that dreams can come true.  She is writing letters to her sponsor in English and her family is very proud of her because thanks to her sponsor’s encouragement, she was able to reach one of her most important goals and completely transform her life.

Hope came from a very poor family background and her parents had no reliable source of income. None of their seven children went to school as they could not afford to pay for uniforms, shoes and books.

“We lived in a house without electricity or running water and my older siblings could not go to school due to financial difficulties. I knew that when I was a bit older, I would join the rest of the family in tilling the land so that we could have food in the house,” Hope explains.

Help was on the way for Hope, as her mother heard about the sponsorship programme after her third birthday. She was enrolled and immediately assigned a sponsor. Her mother who really wanted Hope to get an education knew that her prayers had been answered and she was really excited. The sponsor however cancelled before Hope could start her primary education.

“It was sad when I was told that my sponsor had decided to stop sponsoring me as she had no money. The staff at the project assured my mother that there was still a chance to be assigned to another sponsor,” says Hope.  She was assigned another sponsor in 2006 and this was the beginning of the road to success for Hope and her family members. The quality of her life was immediately enhanced.

“My sponsor was very nice.  She encouraged my parents to put me into school and all the school requirements were bought from the monetary gifts she consistently sent. She also sent clothing and other necessities each time it was my birthday. She became like a second mother that really wanted me to have the finer things of life,” Hope explains.

Since Hope’s family was involved in farming, her sponsor sent money in the form of Designated Fund Gift for the family to purchase an oxcart. She encouraged them to use the oxcart to take their surplus produce into town for sale so that the family could have income for other necessities.

“We bought the oxcart from the monetary gifts and our status has changed. We are the only ones with a means of transport in this community and this really makes me proud and that is why I made sure that I worked hard at school so that I don’t disappoint my sponsor,” she adds.

Another major highlight of her sponsorship is that the family has been able to build a bigger and better house through the monetary gifts from the sponsor.
“We have moved into a house built from the sponsorship funds and all my siblings have benefited. We also own goats now and we will remain grateful to ChildFund and my sponsor for the support we have continued to receive,” says Hope adding that the family is now self-sufficient and able to cope on their own.

At school, Hope has been a diligent student and has managed to sail through primary school. She is now completing the eleventh grade. She wants to study nursing after completing school in 2013. All this is thanks to her relationship with her sponsor.

Hope now serves as a youth leader in her community, encouraging other sponsored children to communicate with their sponsors regularly and helping those who are not able to read and write on their own.  Her story has been an encouragement to all and for ChildFund. It simply shows that poverty does not define the potential of a child. Even children from very poor families can become symbols of bright futures through sponsorship. Simply put, they can live their dreams.

The overall role of sponsorship is Mentorship.  This is demonstrated by helping children to accept and work for themselves, to build their self-esteem and to improve their lives holistically.

“I am very proud of the support I have received; because someone very far believed in me. She made sure there were not obstacles regarding my education, “ says Kaltuma Dabaso, a 22 year-old, second year Clinical Medicine student, currently sponsored to pursue her degree.

Kaltuma comes from a small pastoral community in the East of Kenya where education for the girl child is dire.  She’s the first born of a family of five children supported by her mother, who is a single parent.  Kaltuma is among just a few girls in her Clinical Medicine class and the only one from her community.  She is proud of her accomplishments and is very confident of a better future ahead.  She aspires to get a good job, have a family of her own and above all, she would like to help others just like herself. 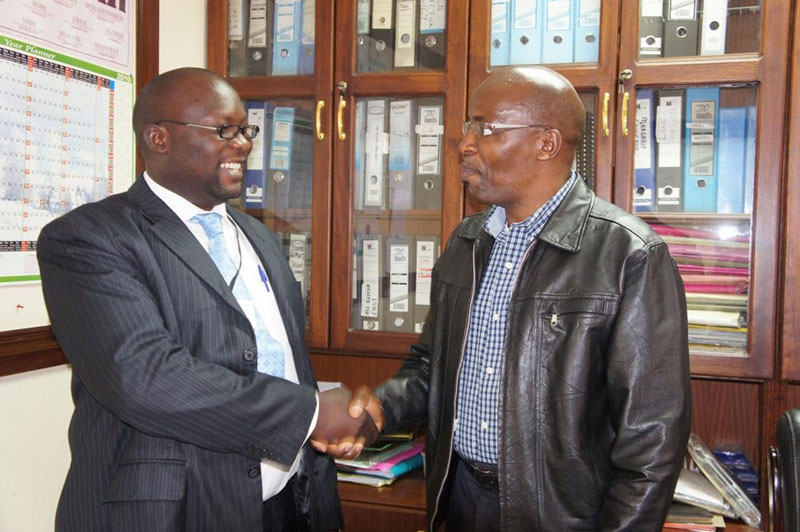